Hello! James from Indiespring here again to talk about how Conversion Rate Optimisation and A/B testing will help you get the most out of your website, app or service and therefore make you more money in the process!

This is part of our “10 ways to improve your online sales” series. If you like what you see you can find links to some of our other posts below.

First of all, if you haven’t yet read my previous post, “Improving Your Online Sales with UX“, I’d recommend you do so as it’s a great little introduction to the world of UX which will be continued in this post. If you’re already up to date with the series then read on.

Conversion Rate Optimisation (CRO) is the process of amending your digital product with the goal of gaining more conversions for your intended goal. For example, signing up to a newsletter or buying something from the shop.

CRO is a very broad term which incorporates numerous different tactics to achieve incrementally positive results. We’ve briefly covered User Experience previously but that’s just one finger of the glove. Today will be an introduction into CRO, specifically regarding the importance of A/B testing.

Left to its own devices, even the best designed products will eventually become obsolete.

When Charles Duell, the commissioner of the United States Patent and Trademark Office in the late 1800’s, was quoted as saying “Everything that can be invented has been invented.” He could not have been more wrong.

When the Romans invented concrete, it revolutionised the building process, allowing for larger and stronger buildings than ever before, and as a result, the world’s first Mega city was built and the technology still used today. However, advancement didn’t stop there. Concrete had its weaknesses which led to the development of brick and metalwork technology which allowed for even larger buildings to be built. The cycle of course continues with modern building technology but I think as an example goes the point has been made.

Luckily for Charles Duell, he was severely misquoted. His actual statement from 1902 redeems the poor chap and leads us nicely into the next section. “In my opinion, all previous advances in the various lines of invention will appear totally insignificant when compared with those which the present century will witness. I almost wish that I might live my life over again to see the wonders which are at the threshold.”

Luckily for the digital sector, we are in the privileged position that our products are not physical. We don’t need to tear something down and start again, we can simply test and improve getting that little bit closer to perfecting it each time.

The process know as A/B testing is where a certain feature of your website is taken, modified and then split into two different variations and served back to your customers to see which one works best.

These two variations will usually look to address only a single issue at a time, for example the position of a specific button. Version A will have the button placed in one location, Version B may be the original version of the page or a different version again. 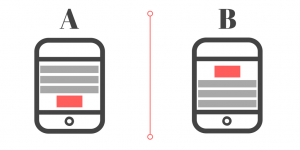 When a user visits this specific page, they will be randomly assigned version A or B and their activity tracked on the site. When enough user data has been gathered, the results are analysed based on criteria such as number of clicks, user mouse movement, page conversion rate etc. The best performing version is then implemented as the live version.

The process doesn’t end there, the same test may have a third or fourth variation which would then replace the discarded version from the previous test and the process repeated. Each time one version is kept and the other removed until you end up with the best performing version of your page.

A/B testing allows you to prove with data which version performs the best. This means we can successfully address one of  the most common obstacles of web design; the personal opinion of both the designer and the client getting in the way of the end goal.

To be truly successful at A/B testing you need to follow these rules:

Although it may be tempting to try out a wide variety of new features and changes in your A/B test, they tend to dilute each other’s performance. Yes, at the end you will have a winner, but you would not have been able to isolate exactly why that page performed better. Testing individual features (two smaller ones at a time if you really, really must) will lead to a better all round result and better conversion rates on the page as you will have perfected each area at a time.

Don’t split your sample ever further

It’s called A/B testing for a reason. Adding in a third sample may seem as though you’re saving time, but will most likely take about the same length of time as doing two lots of A/B testing due to the required sample sizes. On top of that, you will learn a lot from the first A/B test you do. So much so that your third version you had lined up to take on the winner could become obsolete as a result of the first test anyway. This means you may want to amend your third and fourth versions based on these results.

It sounds ridiculous but people can be very resistant to change, even when the proof is right in front of your face that change is required. It’s not uncommon for a site owner to give preference to a certain iteration of the testing, or even the initial page because that’s the one that prefer personally. The trick here is to remember that this is for the benefit of your customers and therefore your bottom line. Not to mention the fact you would have most likely paid an agency to carry out these tests for you in the first place so you may as well get your money’s worth.

That’s all for now

I hope you enjoyed this little insight into A/B testing and Conversion Rate Optimisation, as well as the whole 10 Steps To Improve Your Online Sales series. Over the coming weeks we’ll be releasing some Top Tips from the series, as well as some other key content surrounding the topic.

We’ll also be releasing the full series as a Best Practice Guide, so be sure to stay tuned.

Read about what it takes to develop and maintain a great app in 2020 with industry insights and top tips to guide you through your app development process.
Read Report