NFTs What you need to know now

Across the world, multi million dollar brands have been throwing their time and more importantly, their money at NFTs. Each trying to outdo the other, filing their trademarks and in some instances, designing immersive experiences to shop or display them. If we think back to when this type of movement has happened in the past, the hype is similar to when social networks or cryptocurrency first came on the scene.

Although we named NFTs as one of our top tech trends to watch out for in 2022, this isn’t new buzz, NFTs were first seen back in 2014 and have been on the rise since they hit mainstream media in 2021. Even Collins dictionary named ‘NFT’ as their word of the year.

So what exactly is it?

Well if we refer back to Collins, it’s defined as:

A non-fungible token: a unique digital certificate, registered in a blockchain, that is used to record ownership of an asset such as an artwork or a collectible.

If you want to read a more in depth breakdown of what they are in layman’s terms, the Verge’s Mitchell Clark does a great job of explaining not just how they work but how they fit in alongside the ‘real’ world.

NFT’s came into their own last year and have not just taken the tech world by storm, they’ve garnered mainstream headlines as non-tech companies and creatives across the art world have driven their popularity to surprising heights. 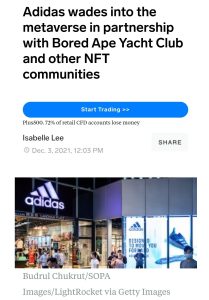 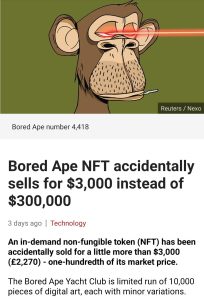 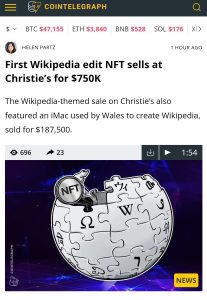 The uncertainty around NFTs looks to be diminishing, as their rarity drives influencers, celebrities and businesses to begin investing in Web3 and beyond.

What true value can they add to your business?

Yes, brands like Nike and Forever 21 are making headlines on broadsheets like the Financial Times due to their development of virtual experiences, mainly through Roblox. The Financial Times also reported recently that the current market cap of NFTs is $41bn, with $54bn being spent annually on virtual goods, more than twice what is spent on buying music. The value an NFT brings is that for the first time, buyers will have a digital certificate as proof of ownership, enhancing the security around a transaction.

But in reality, the logistics around NFTs are not what makes them popular right now with brands. It’s the excitement and direct connections it creates between companies and customers. With so much talk around privacy changes and data, NFTs and the metaverse open up a whole new world of advertising that are actually targeting single bonds, that are share-worthy rather than relying on mass reach.

From what we’ve seen across reporting publications, general public opinions still vary when it comes to spending time in the metaverse, or indeed investing in digital property. Many general polls have shown that the interest in exploring a virtual world or investing personal capital into it, is unlikely for most. There is still a level of risk associated with NFTs, but with giants like Microsoft, Twitter, Facebook all heavily investing in future opportunities that rely on the non-physical world, it’s a discussion that’s worth having as executed correctly, this could potentially be a gamble that pays off.

How have they become so popular, when public opinion is so unsure?

I can only imagine the reason NFTs continue to dominate the news and continue to rise in popularity is because right now owners of NFTs are forming the new exclusive club.

When Facebook launched and was originally only available to university students (college if we go with the US term), it was this exclusivity that drove it’s users to fully adopt the services, build communities of like minded people and as it slowly opened up to wider demographics, everyone who had been waiting on the sidelines for years were ready to instantly jump on.

NFTs are doing a similar thing, the owners are forming communities, cliques that are secret, exclusive and lead to real world meetups as well as digital hangouts.

From the beginning of time, there’s always been the ‘cool’ bunch who are watched by everyone else from the sidelines, wanting to one day be immersed into that world. Here in Manchester city centre, where Indiespring is based, the last few weeks have seen walls and even billboard ads being taken over by NFTs, or street artists launching ‘phygital’ releases. The Bored Ape Yacht Club, an animal themed art project even hosted a meetup just for members, leaving clues around the city, sparking conversation and having the rest of us wonder whether the true value isn’t actually in the ownership of a digital asset, but perhaps in the community it creates.

Webinar: Your guide to the latest 2022 mobile tech trends

3 tech trends you should prioritise in 2022

Year after year, day after day we are faced with new technologies and innovations and more often than not,… Read More

Webinar: Your guide to the latest 2022 mobile tech trends

3 tech trends you should prioritise in 2022

Year after year, day after day we are faced with new technologies and innovations and more often than not,… Read More